Low-cost carriers (LCCs) have soared to new heights thanks to booming demand from young Asian travellers looking to take their first break, joining the ranks of other young people who consider these exciting new brands as part of their lifestyle.

[From The Rise of the Young Asian Traveller, released in August 2014 by the Pacific Asia Travel Association, here’s an article I wrote to sum up why it is young people especially who are flocking to LCCs – a phenomenon that’s giving 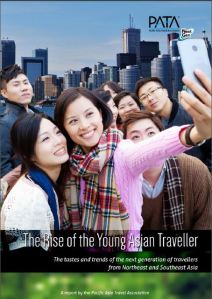 the traditional legacy carriers so much cause for concern. You can find out more about the report here.]

Across the globe low-cost carriers have re-shaped the traditional airline business model and have significantly changed the competitive dynamics of the air transport industry. Consequently they are now the dominant force in most short-haul markets in Europe and Asia[i]. While in Europe, low-cost carriers (LCCs) became established in an already mature market, Asian low-cost airlines have grown thanks to the rise of the world’s most rapidly expanding middle class (a process described earlier in this report)[ii].

The result has been the creation of a range of markets that are ready to embark on inter-regional travel with fervour. With a model based principally on low fares, LCCs make air travel accessible to a whole new market. Besides, the region’s geography often means that air travel isn’t so much luxury as a necessity; despite the wide-ranging rail and road building initiated by governments across Asia, the offer of cheap, fast and flexible air travel has proved an irresistible temptation for business and leisure travellers alike.

Low cost airlines now account for more than half of all airline capacity in Southeast Asia, and in 2014, more than 10 new budget airline start-ups are expected across Asia[iii]. In the Philippines, LCC operations (international and domestic) account for as much as 61% of all airline capacity, while in Indonesia and Malaysia the figures are 53% and 48% respectively. LCC capacity is expected to increase even more dramatically in the next decade[iv].

LCCs and the Asian Millennial traveller

With the Millennial market, the growth of LCCs appears to be self-perpetuating. Clearly LCCs have proved to be a hit in countries with large, young populations of first-time travellers. Attracted by low fares, flexible onlin

e booking options and a strong fresh-faced brand image, for many Asian Millennial travellers LCCs offer their first experience of flying, and of international travel. Figures suggest that the experience is becoming addictive. The following factors may help to explain why:

Southeast Asia already has a high LCC penetration rate – the LCC capacity share of total seats is approximately 56% – but the percentage for North Asia is still low at 9%. This is mainly attributed to tight government regulation on air passenger transport which favours the established flag carriers in the region. Some commentators have also questioned whether travellers in Northeast Asia, used to high-end services offered by the established carriers will take so keenly to the no-frills approach favoured by low-cost airlines.

Where younger travellers are concerned, there is reason to expect rapid-take up of LCC seats when liberalisation takes hold and LCCs start-up. More affluent, aspirational travellers may still be attracted to fly with full service airlines, forcing these to differentiate themselves from the service offered by LCCs. The combination of flexible pricing, convenience and snappy branding that have attracted legions of young travellers from Southeast Asia to take to the skies for the first time however, will be a tough combination to beat.

[vii] Skift, The Reasons Why Travel Loyalty Programs are Going Through Upheaval (27 Feb 2014).

One thought on ““Now everyone can fly!” – Low Cost Carriers and Millennial Travellers in Asia”