Last week VisitBritain embarked on the latest stage of its campaign to attract more Chinese visitors to the UK using images of the country to open potential visitors’ eyes as to what they can find when they arrive in the country.

Many UK places, people, things and attractions still don’t have a Chinese name yet. Some already do, for example 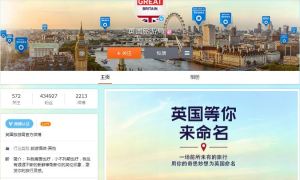 Earlier this year when I compiled the study The Rise of the Young Asian Traveller for the Pacific Asia Travel Association, the UK didn’t even enter the top 10 on the destination wishlist of young Chinese respondents to our survey. This suggests unfamiliarity with what the UK has to offer, something which this campaign is clearly set up to change.

Check out the video which explains how some Chinese participants reacted when they saw some images of the UK for the first time:

While Chinese arrivals in Britain grew by 10% between 2012 and 2013 (and spending was up a whopping 64%), the UK still only received 12% of the number of Chinese arrivals that France did in the same year. In Europe, Britain trails behind Austria, Italy and Switzerland in the number of Chinese visitors it receives, largely because of the extra cost and complication of applying for a UK visa as opposed to a Schengen visa which gives access to all countries within the Schengen zone.

While Chinese visitor numbers are clearly not at the levels they could be, in some way the visa situation encourages those Chinese visitors that do make the trip to spend longer in the country and make more visits outside of London than other visitors (especially from Asia) typically do.

The UK government has received sustained criticism from major businesses such as airlines and retailers who are worried that the country is seriously lagging behind neighbouring competitors in terms of visa issuance. Recently the government announced the introduction of a super priority visa that, in exchange for 600 GBP could be issued within 48 hours. The UK government is also reportedly looking for ways for other EU member states to accept UK visa applications at the same time as their own Schengen applications, simplifying the process for potential visitors. The campaign is also being launched in cooperation with the UK immigration authorities who will use the opportunity to explain the revised application procedures to potential visa applicants.

My take on the campaign:

The £1.6m 10-week long campaign is VisitBritain’s largest ever campaign in China. Upon a first glance it seems set to be a promising campaign for the following reasons:

My Tweets
Join 806 other subscribers